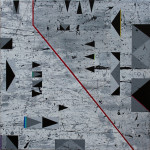 Experimental series called [MAD]?ness. The abbreviation MAD is based on the phrase "Mutually Assured Destruction". The title I used for this series points to a specific doctrine of military strategy and national security policy in which a full-scale use of nuclear weapons by two or more opposing sides would cause the complete annihilation of both the attacker and the defender. It is based on the theory of deterrence, which holds that the threat of using strong weapons against the enemy prevents the enemy's use of those same weapons. The necessary symbolism for this cycle is the "thin red line" as a point (border) of no return and where safety can no longer be guaranteed.